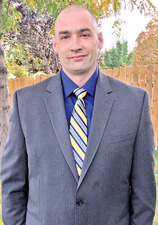 Currently he holds a combination inspector license with the State of Utah and is certified by the International Code Council.

When Steve is not working his full time job, he enjoys all things mechanical (motorcycles, cars, and planes), fixing and building items around the house, playing video games with his son, and reading good books.
Steve and his wife Amber have three children. They are looking forward to become grandparents sometime in March.
Today, News
Follow the Taylorsville Journal on Facebook!