Officer Madsen
Every officer is dispatched to retail theft reports. It is the exceptional way Officer Madsen (top) resolved this case that I bring this to your attention. The dispatched case revealed theft of clothing from Plato’s Closet. Further investigation revealed the theft suspects who were as of yet unidentified were driving a stolen vehicle.
The day following this theft, Officer Madsen, who is always aware of activity in his own and surrounding precincts, learned the stolen vehicle was recovered by Sergeant Bailey in Kearns. Officer Madsen responded to the stolen vehicle recovery and completed his investigation. The theft suspects were identified and the stolen clothing was recovered and returned to Plato’s Closet.

In summation, Officer Madsen’s investigative acumen, coupled with completely competent follow up, solved what could be a mundane, run of the mill theft. To the store employees at Plato’s Closet it provided absolute confidence in the police department that patrol the streets of Taylorsville City. 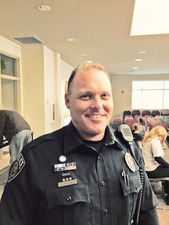 Officer Marshall
Sergeant Montgomery would like to recommend Officer Bryan Marshall as the Officer of the Month for September 2014.  His actions in a recent aggravated robbery case, 14-150504, directly resulted in the arrest of 3 people who were recently involved in several other crimes in Taylorsville.  It was a prior encounter Officer Marshall had with the suspects that led to their identification and arrest in this case.

Officer Marshall had previously investigated a vandalism case involving several people at Vista Elementary. While viewing video from the aggravated robbery incident at Wal-Mart, he recognized the suspects to possibly be the same. He had recalled a female who had been called in the vandalism case who came and picked everyone up after citations had been issued.  Officer Marshall requested that Officer Madsen respond to this location to see if the suspect vehicle was there.  It turned out that it was and all involved were apprehended.

Officer Marshall’s awareness and follow up resulted in the arrest of several violent offenders. His actions warrant recognition. 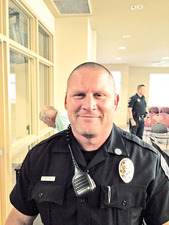 A previous assault investigation provided Officer Wersland with the identities of three individuals who reside in Taylorsville. On this occasion a stabbing occurred during a fight. The victim received minor injuries but the assault was felonious in nature and involved a knife.

Officer Wersland immediately went to work solving this incident. He established a rapport with the suspects on the previous case. This connection allowed identification of the primary suspect as well as details that will ultimately bring aggravated assault charges forward. Officer Wersland worked diligently for several days to ensure justice prevailed on behalf of the stabbing victim. Officer Wersland’s abilities and attention to detail represent the finest of the Unified Police Department.
Today, News
Follow the Taylorsville Journal on Facebook!